The only leader who could drive forward the J. R. Jayawardena vision to enrich the country is President Ranil Wickremesinghe -Ven. Palpola Vipassi Thera 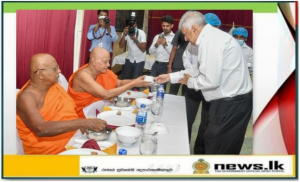 Sri Lanka would have been a developed country had the late visionary leader J. R. Jayawardena been the leader of the country at his young age and it is none other than Ranil Wickremesinghe who could elevate the country to such a level, said the Kotte Vihara registrar and Chief Sanghanayake for Japan Ven. Pelpola Vipassi Thera

The Ven. Thera added that late President J. R. Jayawardena’s blood relative, Ranil Wickremesinghe can build up the country, adding that they have earned nothing from politics but dedicated their own property for the benefit of the public. The Ven. Thera also said that due to the failure to identify the correct leadership in the past, the country has had to face a crisis today.

Ven Palpola Vipassi Thera made these observations preaching at the almsgiving for the Ven Maha Sanga at the 26th death anniversary commemoration of Sri Lanka’s first Executive President the late J. R. Jayawardena at the J. R. Jayawardena Centre in Colombo 07 this morning (01). The President too participated to offer alms to the Maha Sangha.

Ven Palpola Vipassi Thera further said that most do not realize the importance of people while they are alive. The people too could not understand the value of Lord Buddha and other religious leaders while they were alive. In the same manner, the people could not understand J.R. Jayawardena’s values while he was alive. Statues were erected for every leader of the country except for J. R. Jayawardena.

The Thera further said that it is commendable that even after 26 years of J. R. Jayawardena’s demise, the family members along with the President perform meritorious deeds on his behalf as a mark of gratitude to him.

Thimbirigasyaye Ashokaramaya, Western Province Nawathotamuna Upa Pradana Sanganayake, Shasthrapathi, Panditha Getahette Sobitha Thera delivering a special Anusasana said that the death anniversary commemoration of J. R. Jayawardena is held every year. He was a person with humane qualities whether he was in the government or the opposition.

Ven Thera said that the late J R Jayawardena brought about peace by quoting the Lord Buddha’s preaching ‘Nahi Verena Verani’ during his address at the San Francisco Peace Conference. As a result, Sri Lanka was gifted with the Sri Jayawardenapura Hospital and Rupavhini Corporation. They were neither loans nor gained by way of politics. They were donations for bringing peace to the world.

The importance of the Buddha’s preaching that he highlighted earlier is more relevant for today’s world and Sri Lanka than in any other era. All Sri Lankans should unite accordingly to free the country from the crisis situation it is facing today. Under such a situation, the value of a leader such as the late J R Jayawardena is greatly felt today.
Prime Minister Dinesh Gunawardena, Speaker Mahinda Yapa Abeywardena, United National Party (UNP) Chairman and MP Wajira Abeywardena, Parliamentarians Tissa Attanayake and Yadamini Gunawardena also participated.