Sri Lanka real wages down as inflation races ahead 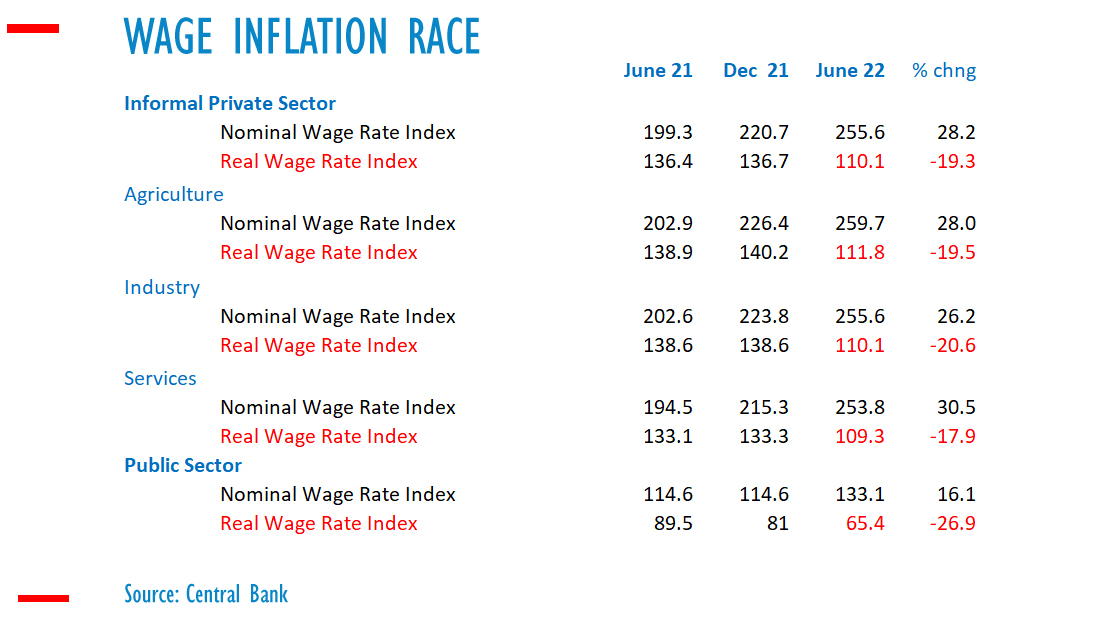 ECONOMYNEXT – Sri Lanka’s informal sector wages have started to pick up in rupee terms but are still unable to keep up with racing prices, with real wages down after inflation by June 2022, official data showed.

In the agriculture sector nominal wages had climbed 28 percent in the 12 months to June 2022, but real wages were down 11 percent.

The National Consumer Price Index on which the wage index is based soared 58.9 percent during the period after the rupee collapsed steeply in 2022 after two year of money printing.

The agriculture sector is an area in which prices respond fastest to money printing raising incomes of farmers initially. Food prices are up around 90 percent in the 12 months to August.

Informal industry wages are up 26 percent but real wages were down 20 percent by June.

In the informal services sector rupee wages were up 30 percent over a year but were down 17.9 percent after inflation.

There were no data on the formal sector but public sector wages which were raised in January were also down 26.9 percent by June. In recent years there had been gains in public sector real wages.

Some export firms had also begun giving allowances to workers as prices rose after the rupee collapsed, allowing firm to earn more rupees.

When currencies are depreciated by economists by printing money or deliberately, wages catch up with a lag giving temporary profits to export and other firms.

However formal sector wages do not catch up immediately, triggering strikes and social unrest as economists expropriate wages from the pockets of salaried workers, through monetary interventionism.

Inflationist-devaluationism became a part of official policy peddled by Washington based Mercantilists (generally known as BBC or basket, band, crawl) to third world nations which continued to experience monetary and political instability.

Currency depreciation was rejected by all stable high performing East Asian nations, but was adopted to some extent by Indonesia, which ended up exporting labor to neighbhouring states with monetary stability.

Bank Negara Indonesia was set up with some of the provisions found in the central banks of Sri Lanka and Indonesia including provisional advances, in a post-World War II frenzy of interventionism and interest rate suppression. (Colombo/Sept05/2022)