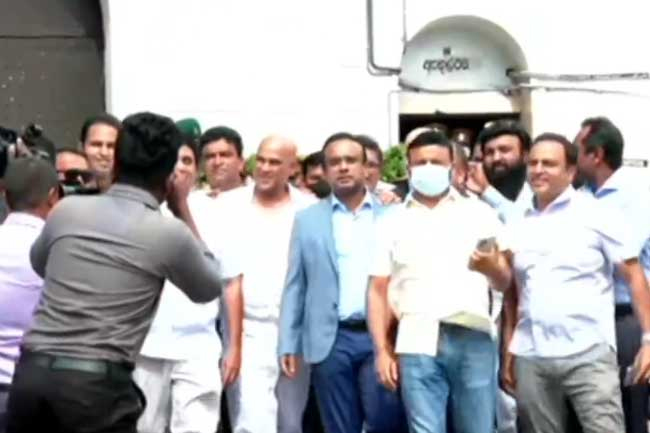 Former parliamentarian Ranjan Ramanayake, who was incarcerated over contempt of court, was released from the Welikada Prison this afternoon (Aug 26) after he was granted a conditional presidential pardon.

President Ranil Wickremesinghe had signed the document pertaining to Ramanayake’s release this morning.

The document was subsequently handed over to prison officials by Secretary to Justice Ministry, Wasantha Perera, who was tasked with making the necessary arrangements for Ramanayake’s release.

In an announcement, the President’s Media Division (PMD) stated that Ramanayake was granted presidential pardon on the condition that he would refrain from making any comments in contempt of the judiciary in the future.

On January 12, 2021, the Supreme Court sentenced Ramanayake to 04 years of rigorous imprisonment over a case filed against a derogatory comment he had made with regard to the judiciary, outside the Temple Trees on August 21, 2017.

He was later handed a sentence of two years rigorous imprisonment suspended for a period of five years over another contempt of court case filed against him.

Submitting an affidavit to the court yesterday (Aug 25), Ramanayake made an official apology for the comments he had made. Deeply reflecting on the statement made by him outside the Temple Trees in August 2017, Ramanayake admitted that his comment was utterly contemptuous of the Chief Justice and the entire judiciary.

In his affidavit, Ramanayake profoundly apologized and sought the forgiveness of the entire judiciary.

He also gave an assurance that he would never again, in his entire lifetime, make any statement critical or derogatory of the entire judiciary, the PMD said further.